My holistic approach in treating my patients

In my practice, I use a holistic approach in treating my patients by analysing the physical, nutritional, environmental, emotional and social aspects of the patient’s lifestyle rather than focusing on the physical illness or specific parts of the body. Therefore, I do not simply focus on treating just the symptoms, but I also look for underlying causes of the disease to manage them.

The approach I have focuses on encouraging personal responsibility in order to achieve balance and well-being. However, it’s important to stress that I prescribe medication and refer patients to a surgeon whenever it is necessary.

In another way, I combine traditional medicine alongside complementary medicine (CAM) to treat a patient. For example, when a person suffering from rheumatoid arthritis visits me, instead of prescribing medications only, I will look at the risk (important) factors that may be aggravating the disease, such as other health and lifestyle problems such as:

Most standard therapies for pain relief frequently pose adverse effects, particularly in older patients, further compromising the quality of life. NSAIDs increased risk of gastrointestinal bleeds and induced renal, cardiovascular, central nervous systems. Thus, there is a need for non-drug and non-invasive therapies for chronic pain such as low-level laser acupuncture therapy (LLLT) which is defined as the stimulation of traditional acupuncture points with low-intensity, laser irradiation.

The effectiveness of LLLT remains debatable.  However, it has shown some benefit in the treatment of painful neurological and musculoskeletal disorders such as carpal tunnel syndrome, neck, and low back pain. In addition, several studies found no differences in anti-inflammatory effects between LLLT and NSAIDs such as indomethacin, meloxicam, celecoxib, and diclofenac when they were administered at doses equivalent to those given in clinical practice. It was approved in 2002 by the U.S. Food and Drug Administration (FDA) as a non-significant risk device that may be used as an adjunctive treatment of painful conditions.

Therefore, laser acupuncture is an integral part of the strategy in my clinic.

In addition to drugs to relieve symptoms, our centre, through its team of professionals, uses a collective management approach that addresses lifestyle modifications including diet, exercise, psychotherapy to avoid arthritis activity and overcome the long-term side effects. Such an approach helps my patients take responsibility for their own well-being and achieve optimal health.

If you’re interested in considering a holistic approach to your health without moving completely away from conventional treatment, Dr Houssien is available for expert advice and assistance. Visit his Top Doctors profile here.

What is low-level laser acupuncture therapy? 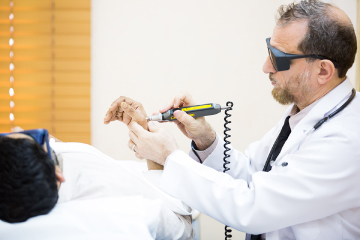 New approaches in the treatment of pain: the low level laser